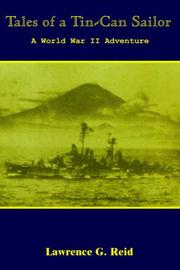 Tales of a Tin-Can Sailor by Lawrence G. Reid

This 'Tale of a Tin Can Sailor' was written by my grandfather whom sadly passed in When I was kid, I remember asking my grandfather these stories, crossing the ocean, meeting the Germans and dealing with the Japanese Kamikazes. These wild stories were unbelievable to hear as a kid thus were his inspiration to share with the world.5/5(3). Tales from a Tin Can is the true story of the destroyer USS Dale (DD ) in the words of the sailors who served on her. These colorful first-person accounts bring every aspect of service on a World War II destroyer. From the attack on Pearl Harbor: “I was down below, brushing my teeth. With his new book, "The Last Stand of the Tin Can Sailors," literary agent and author James D. Hornfischer has documented one such lesser-remembered World War Two tale with a reverence befitting the brave men who fought and died for America's events of the book take place during the Battle of Leyte Gulf, which stands as the largest. What was life like on a destroyer during World War II? Find out by reading Michael Keith Olsons superb telling of tales of the war in the Pacific as seen from the deck of a very luck tin can The son of a former Dale crewman, Olson interviewed 44 veterans and delved deeply into official documents to give this book the air of authenticity that puts the reader in the heart of/5.

Tales of a Tin Can Sailor is a wide ranging story of a sailor, two ships and many dedicated fighting men who, working together with a single purpose, accomplished sometimes heroic things. From waging submarine warfare in the Atlantic, participating in all of the invasions in the Mediterranean, to battling kamikazes in the Pacific, shooting down the last Japanese plane, with a Pages: The latest in our book series. Our USS KIDD book has 80 pages of text, drawings, and photos. Written for Tin Can Sailors by internationally known author Robert F. Sumrall. This book details the ship’s history, construction, and equipment. An outstanding publication that you will find both enjoyable and informative. The Hardcover of the Tales of a Tin Can Sailor by Lawrence G Reid at Barnes & Noble. FREE Shipping on $35 or more! Due to COVID, orders may be delayed. Thank you for your patience. B&N Book Club B&N Classics B&N Collectible Editions B&N Exclusives Books of the Month Boxed Sets Discover Pick of the Month Escape into a Good Book Read. William McGee, author, The Solomons Campaign “Tales from a Tin Can is one of the best books I’ve read on Tin Can History– one hell of a good read and difficult to put down.” Billings Gazette “Olson’s book is like being right there with the young sailors aboard the vessel during Japan’s harrowing attack on Pearl Harbor on Dec. 7.

"Tin can sailor" is a term used to refer to sailors on destroyers. The Last Stand of the Tin Can Sailors is a book by James D. Hornfischer about the Battle off Samar on Octo , in which destroyers saw off a much larger force of Japanese ships. Tales from a Tin Can.   As a former tin can sailor I was drawn to this book as an addition to my other Navy history books, most notably "The Last Stand of the Tin Can Sailors". As one review quite rightly notes there is the blurring of memory with post war reading. I was particularly amused Pages: "Tales of a Tin-Can Sailor: A World War II Adventure by Lawrence G. Reid A readable copy. All pages are intact, and the cover is intact. Pages can include considerable notes-in pen or highlighter-but the notes cannot obscure the text. The nonfiction book The Last Stand of the Tin Can Sailors: The Extraordinary World War II Story of the U.S. Navy's Finest Hour is the first full narrative account of the Battle off Samar, which the book's author, James D. Hornfischer, calls the greatest upset in the history of naval hed by Bantam Books in February , the book won the Samuel Eliot Morison Award for Naval Author: James D. Hornfischer.